Building Code Board of Appeals

What to See and Do

Amidst the changes brought about by the completion of the new bridges in West Point and a comprehensive effort to invest in the business health of the community, the West Point Economic Development Authority commissioned Arnett Muldrow & Associates, Ltd. to conduct a commercial market analysis for the town in the spring of 2006. The study for the community began with a customer zip code survey conducted by eleven local retailers along with a series of over forty interviews of stakeholders, property owners, citizens, high school students and other interested individuals. In addition, the Arnett Muldrow team conducted a comprehensive reconnaissance of the town examining the commercial sectors, areas of growth, and the downtown.

From that information, Arnett Muldrow conducted a detailed market definition study, a sales and retail leakage analysis, a retail shares study for the community, and a market segmentation study. This information formed the foundation of a series of recommendations designed to align the existing efforts already taking place in the community along with new initiatives around five central strategies to enhance the business base for West Point.

West Point’s market is primarily local that covers West Point itself (both the town and unincorporated areas with a West Point zip code), Mattaponi, Shacklefords, and Barhamsville.

Slightly over half of the customers that visited West Point shops had a West Point zip code and only an estimated 2% of the visits were from places outside of a one-hour drive time of West Point. A secondary trade area included the King William, Lanexa and Saluda zip codes. West Point businesses have a toe-hold in this market area. 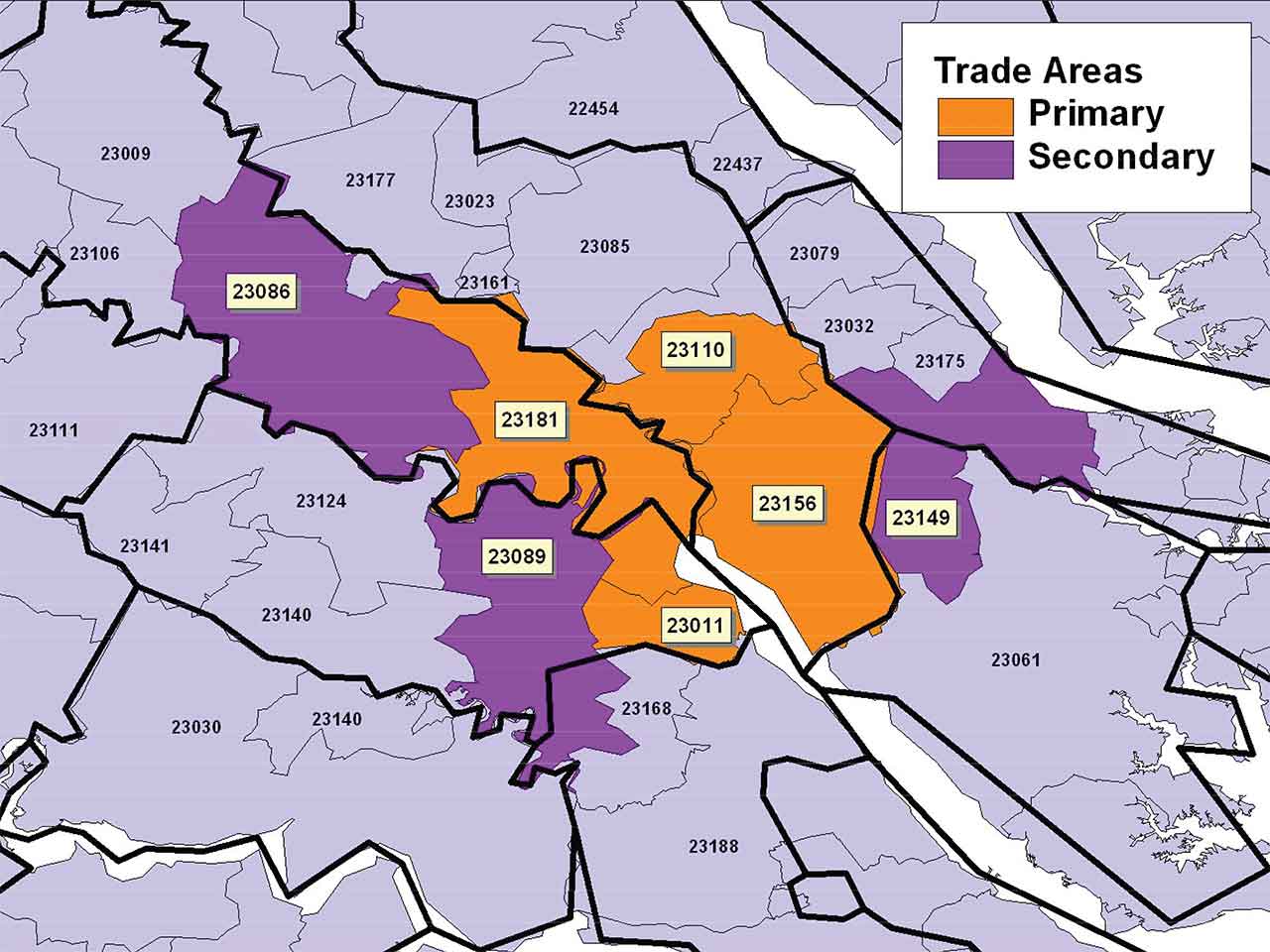 The market for West Point represents a customer demographic that is growing in population and affluence and is becoming more and more like the fast growing urban areas it borders. The combined trade area for West Point has a population of 20,249 (with 8,530 in the Primary Trade Area). This population is growing at a rate comparable to the Richmond Metropolitan Area and is expected to continue to grow.

The median income for the Primary Trade Area is $46,093 and $54,087 for the Secondary Trade Area. This compares with $54,218 for Richmond Metro and $55,617 for Virginia. The Secondary Trade area for West Point in particular is seeing a large influx of affluent retirees and families seeking the lifestyle of a more rural location with the proximity to large metropolitan areas. 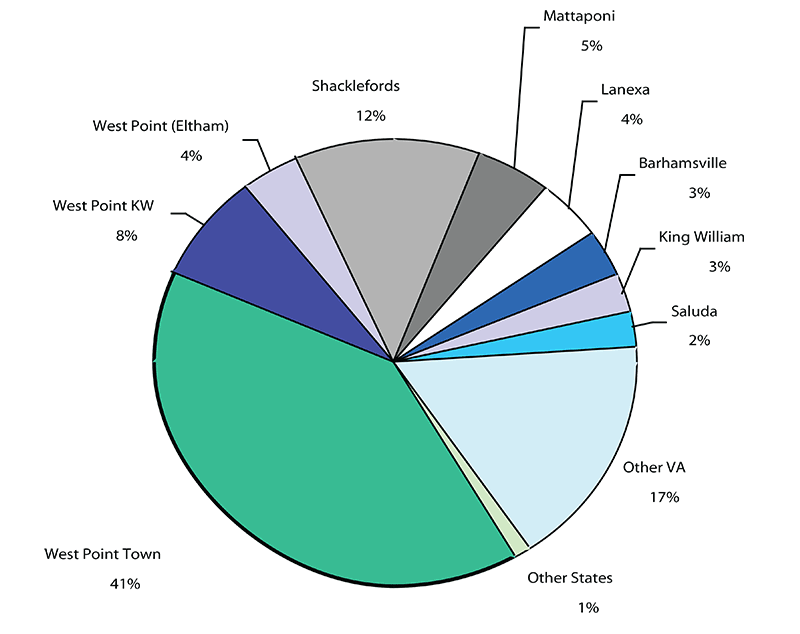 “Retail Leakage” refers to the difference between the retail expenditures by residents living in a particular area and the retail sales produced by the stores located in the same area. If desired products are not available within that area, consumers will travel to other places or use different methods to obtain those products.

Consequently, the dollars spent outside of the area are said to be “leaking”. If a community is a major retail center with a variety of stores it will be “attracting” rather than “leaking” retail sales. Even large communities may see leakage in certain retail categories while some small communities may be attractors in some categories.

The most likely store types to be successful in West Point would be: apparel of all types, books, hobbies and sporting goods, home furnishings, antiques, and the very important category of restaurants. Detailed tables and space projections in the report show exactly the number and types of stores that might be supportable should West Point be able to capture a portion of the leaking sales back to the community

The “Strategy Board” on the following page summarizes all of the projects and recommendations included in the Retail Market Study and Marketing Plan. The Strategy Board is designed to be a working document for benchmarking and ongoing evaluation of the implementation process. It presents the recommendations, responsible parties, an overall vision, and time frames for each task or recommendation. In many cases, the projects and programs on the board were already underway in West Point but the board presents the projects so they center around four strategic themes:

Retaining The Customer: A Marketing Strategy

Investing in the Future: Economic Development

West Point will take a proactive approach to assemble, preserve, and be a partner to develop additional retail space in the community to enhance the balance of land uses in the town.

Reconnecting to the Water: Visitors & Quality of Life

West Point will reconnect with the water that makes the town so unique in order to provide for a high quality of life for residents, to attract new residents, and to cultivate the pass through and visitor market that experiences the community.

West Point, Virginia will continue to cultivate innovative partnerships to develop its economy.

The Town Of West Point has the following retail, commercial and industrial sites available: 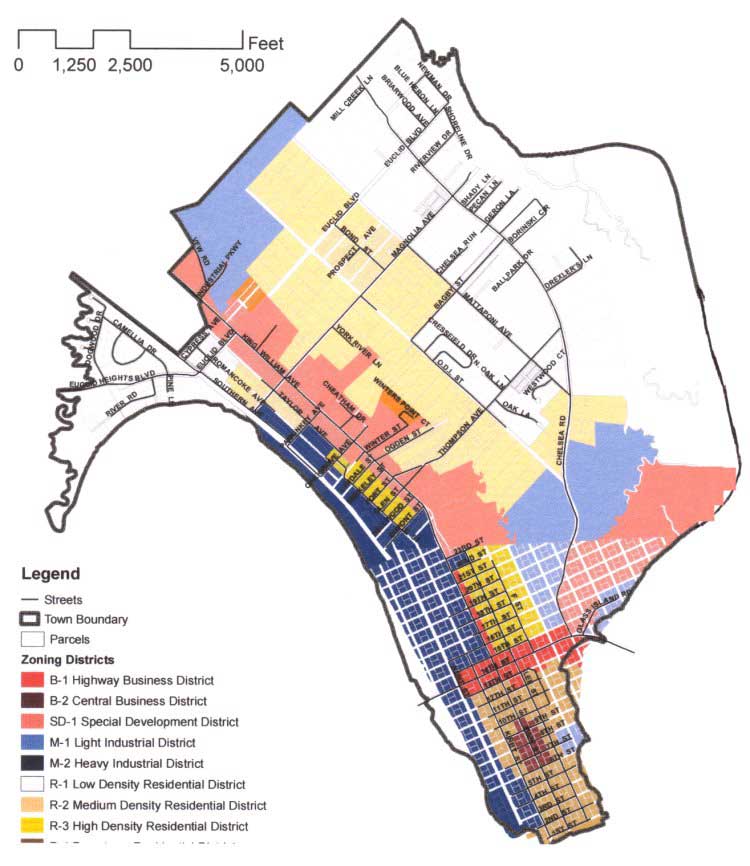 Use Adobe Acrobat Reader to view the available sites. 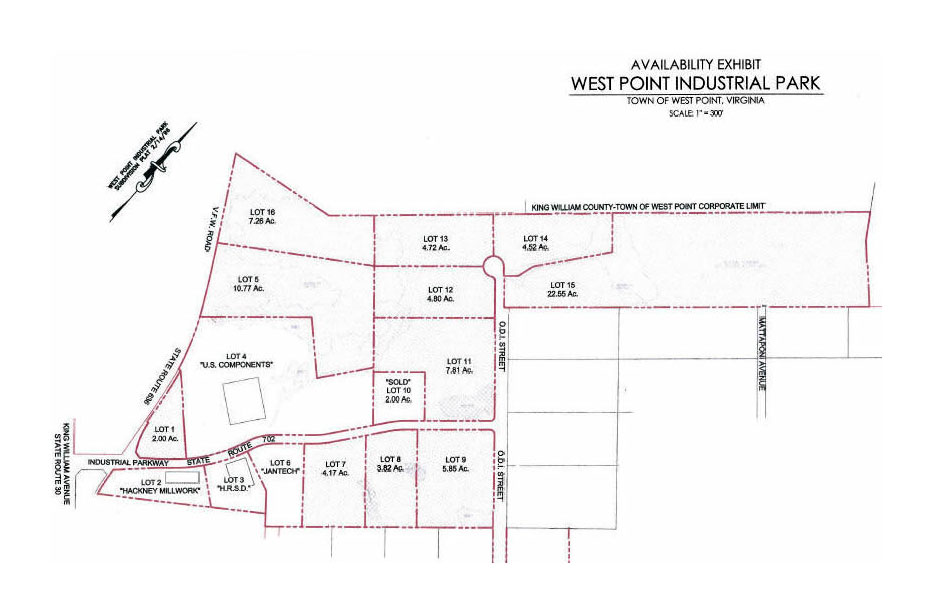